Fun-times in the Shadows of Angmar days

So back in the Shadows of Angmar days tied to the rise of Amarthiel there were a series of dev spawned events that popped up around the world.  They spawned all over the land and also in the Moors – which from what I understand was a real rough time for the freeps out there.  So one day while farming Barud Gularan (one of my favorite SoA instances) Amarthiel paid us a little visit.  We were in a pretty good routine as we were just farming Udinion for his teal drops.  A few of us missed it, we were just stepping out, disbanding, re-inviting, and re-doing the instance.  But as we were checking who was in the instance someone called us back outside.  Pretty fun fight with some of us taunting her before dispatching of her minions.  She had some cool lines and basically called waves of fighters against us – we had to be especially careful of the giants in the area

I really wish they’d bring back these events as they were a blast and usually a total surprise.

Almost done with the smack-down

Shot of the loot

Cloak Barter item on my minstrel 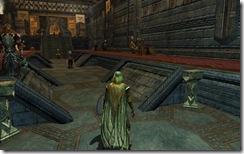 Another fun day was running through the Delving of Fror in the Moors.  It was just 5 of us in pretty much raid content but we were just messing around trying to see what we could do.  We decided that we’d try this big nasty tree boss – which seemed like suicide at the time.  And without a whole lot of patience and creative use of the terrain it would’ve been a certain wipe.  It took us a LONG while and we had lots of close calls with the adds and re-spawns but we were able to bring the big tree down.  The downside was the based on where we were with respect to the adds – looting it was impossible 😦

Trying to figure out what to do

Link to image of fight start

And finally, same group of us decided to finish off the Angmar challenge quests for one of our completionist friends.  When we walked in the door we had a total oh-s*** moment as none of us had ever done the fight before.  Needless to say I won’t spoil the fun of the fight, it is a blast and yes you do have to clear the room.

My apologies for the links, but sadly I have lost the originals on my hard-drive somehow.

Posted in LOTRO, Raids and End-game