I ended up getting in a late night Sammuth Gul run last night with a couple of friends.  Our group wasn’t quite optimal as we were lacking a traited healer and didn’t have any crowd control.  I think I was more worried about the CC then I was the healing (as you’ll see later on) as the loremasters in there are just downright nasty.  However, we had lots of DPS, and lots of interrupts which made this a fun and exciting run.  I was on my Warden along with a guard, captain, champion, DPS spec’d runekeeper, and a full warrior skald traited minstrel.  The trash really wasn’t too bad as we essentially had 4 off-healers in the group and with all the heavies we had lots of spare morale.  Our Minstrel was able to stay in War-speech for a good deal of the fights and only towards the end or if we got an unlucky pull did he have to drop out.  We had a couple of marathon fights with summoners and unlucky punts onto bone piles, but the ability of our guard to get conjunctions off was key to us being able to move as quickly as we did.

The only part that really worried me was the Gorothol fight as there’s just SO many mobs and things get very crazy in there.  As the adds started to pile up we were able to just grab everything in the middle with the guard and myself trying to grab all the agro and the champ and runekeeper doing as much AoE damage as possible.  Our minnie was watching out for the loremasters to keep them occupied, trying to keep alive, and trying to toss us the occasional heal.  Although, as the following log will show I did a pretty darn good job of keeping myself alive as all the adds are a Warden’s dream 🙂  After a while I think the guard and I had the agro shared pretty well but my morale bar wasn’t moving much at all as I just kept cycling through our life-taps and conviction. 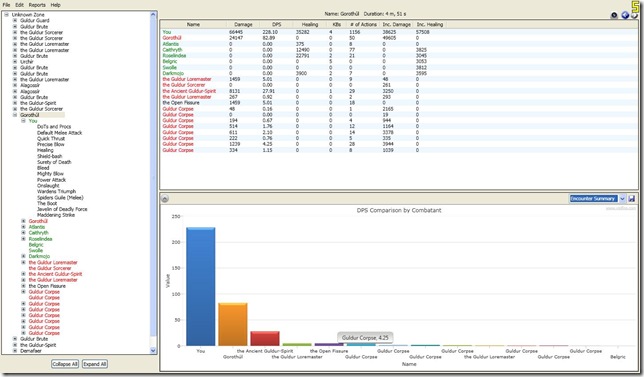 So over the course of the entire fight, I was healing myself for roughly 100 morale per second 🙂 which surprised me when I looked at it considering I probably wasn’t healing at all for at least the first half or so.  Also, if you look at the breakout of my attacks you’ll see just how much more damage our gambits do versus the builders and has me thinking that I can slow down some and rely more on the masteries to build my gambits to save some power and I won’t sacrifice that much threat or DPS. 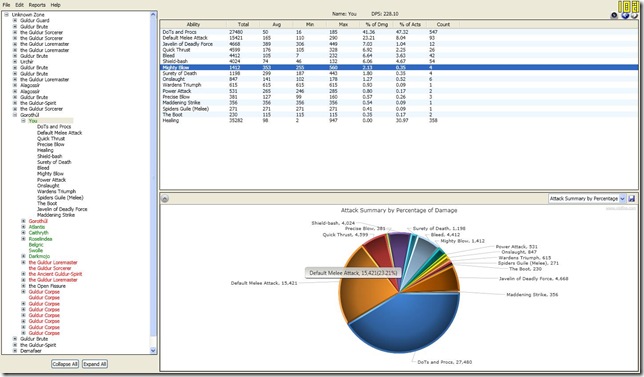 But with critted food and power pots, I actually seemed to be in a better spot then some of the others in our group so that made me happy.  I’ve also noticed that since I have a larger morale pool I can actually drop down enough to use Darkness Before Dawn and not get destroyed.

And finally, we did get a symbol drop, which sadly I did not win, but at least it did go to my friend who hadn’t won one before.