I had almost removed them since they hadn’t been updated in so long but I was pleasantly surprised when I noticed new episodes of Ringcast by Lady Sinea and The One True Cast by BadPanda pop into my iTunes.  Both plan to put out new content now that they’re getting spun up on all the F2P news and excitement.  I know there are quite a few LOTRO Podcasts but it is always good to get another perspective on things.

Promising news from Turbine Regarding Horses in F2P Store

So there’s been some talk on this one by both Mordor or Bust and Casual Stroll to Mordor but I did want to post the confirmation post from Sapience:

Reputation mounts were removed based on beta player feedback.

For those of you who think betas or our feedback don’t matter, here’s another case where they do.  I’m quite happy that they’ve been removed, although I would’ve been ok if they figured out a way to make them gated behind reputation.  A couple posts down Sapience continues to mention that they’re still tweaking prices based on player feedback and there will be another update before launch.  Good stuff and I’m happy to see the direction they’re moving in to try and balance the store out.

Posted in LOTRO, Raids and End-game

Turbine has continued to pump out Dev diaries and I’m a bit behind I’ll admit.  But since the NDA has been lifted, I think much of this information is out there but it is always good to see how the Devs see things and get a little more insight on their process.

First up from last week was the Volume 3 Book 2 Quest Line diary talking about that portion of the epic line.  I specifically didn’t do these quests on Bullroarer as I wanted to save them for live.  I’m pretty excited about this portion of the story as not only do we get to follow the rangers path but also get to learn more about their stories.  And of course, there’s the Ranger Session play that’s always enjoyable 🙂  The new technology to show and hide people based on your quest log sounds really cool and I’d love for them to roll that out everywhere as it is a bit lore-breaking to see folks in the wrong areas.  The other big news item in this diary is the announcement that we’ll be able to re-play all the various session plays as much as we want.  There are some really fun ones, so I quite like this idea for quick play-sessions.

The other diary was today’s release of the Wardrobe System, which for me is one of my favorite features of the F2P roll-out.  I probably have a few bags on all my toons that are purely cosmetic and many are storing the same items.  This will not only allow for more storage of useful items but another way to share items between characters.  I’m glad they walked through the usage of the system as I’ll admit it took me a bit to figure it out – putting items in is easy as you just drag the item and it puts a copy into the wardrobe.  You can then feel free to delete the one in your inventory if you want.  To equip though, you need to drag the item directly to the slot on your character panel and not to your inventory.  It is also nice that you can store various color variations using one slot and just use a pull-down to select which color as opposed to each color taking up a slot.  And finally, the requirements to wear the cosmetic items have been loosened such that you don’t need the level or reputation to wear them but you will be limited to armor types.  For instance, you won’t be able to deck your Minstrel out in heavy armor but your Captain will be able to cosmetically equip your Champion’s Rift Set.

So we finally have a date!!  Turbine has announced September 10th, 2010 as the launch date for the Free to Play system.  Now I’m assuming this means we’re also getting Enedwaith but it isn’t explicitly stated just that they expanding the epic story line.

In addition, there’s a pre-release for current and previous subscribers starting September 8th.  This post also confirms that Enedwaith is part of the release.  I like pre-releases as it should help on server loads quite a bit.

I’m glad it is happening this quick, but once again Turbine has picked a launch date around my vacation when I’ll be spending time with my family but certainly I’m not going to complain with a earlier launch date then what I expected.  Now I just have to start planning out what to get in the store when it launches 🙂

This week a bunch of my playtime was actually over on Bullroarer and I enjoyed it quite a bit for a number of reasons.  I did get in a partial DN run on my Warden but that was relatively routine.

First up was the Beta Stress test on Wednesday which after some initial bumps got off to a pretty decent start.  A bunch of us were chatting over Twitter so we were able to join up in game.  This was pretty fun as I got a chance to run around with folks I don’t normally get to play with but talk with frequently.  They briefly pulled the servers down but only for a few minutes and then left them up for the duration of the event.  Nothing too interactive from the devs as I think they were mainly trying to stress test the store and work any of the kinks out of that.  It does seem like they’ve worked some things out as it does seem to be more responsive and a bit smoother, but I still think there’s some work to be done.  One very cool thing they were testing out was the “Ripcord” capability which allows Turbine disable all Lua scripts globally from the server side.  This allows them to maintain control and quickly disable things if they find a loophole or some undesirable script floating around.

After some of the “scheduled” stuff, the group of us just roamed around Enedwaith for a bit checking out the areas.

I took some screenshots and managed to do a little building climbing as well.

One thing I thought was pretty cool is they finally found a home for the old crystal dwarf instances that were pulled from Moria! 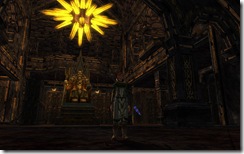 I always thought those were cool spaces so I was happy to see them back in.  Also, I tried to get a decent shot of the new drakes as those are some pretty cool looking monsters!

Then last night I joined some of the folks from the LOTRO Reporter Network and we ended up running the new Great Barrows instance.  We started it more or less on level with the 5 of us between levels 20 and 30.  Since we only had 5 we tried dialing it down a couple levels but did struggle a little bit until we brought in a couple big toons to just finish it off.  I really enjoyed the new layout of the zone and thought it was a much smoother play through.  Sadly my hard drive was having some issues and I ended up losing the Fraps capture of the run.  The Instance Join functionality is incredibly convenient as you jump right to the instance and return right back to where you joined the instance from.  Also, we only made it through 1 wing of the instance and I had enough of the special skirmish marks to get 1.5 pieces of the armor, so it seems like getting the armor won’t take too many runs through the instance.  And I’ll admit I might have missed some of the loot as I was mainly just enjoying the instance.  However, playing with folks on Bullroarer really makes me want to have cross-server instance join!

I’m not 100% sure where I found Scormus’s Full of Fail Video podcast but I have enjoyed them quite a bit.  He’s up to episode 5 now and they’re all around 5 to 10 minutes in length.  There’s some news coverage but what I really enjoy is the fact that he films it all in-game and I can really appreciate the effort to get emotes and such synced up.  I do enjoy the various podcasts I listen to but having quick in-game versions are nice as well.  You can also check out Scormus’s YouTube Channel page or the link above for his first episode.

I’m sure many of you remember the vivid scene from the movies showing the lighting of the Beacons as they stretched from Gondor to Rohan.

I always took that scene with a pretty big grain of salt and just assumed they took a few liberties with reality to make something that looked cool but kept to the general concept.  However, this post from an Associate Physics Professor was mentioned on the official forums and I couldn’t help re-posting it.  He goes into incredible detail about the speed at which things could really happen as well as how fast they would be moving to match the movie clips.  He does note that the books pretty much gloss over this whole concept and I’ll admit I was always curious how something like that would work.  He proceeds to the do some real-world testing and extrapolation to what it would take to send a similar signal down the East Coast of the US.

I will be curious to see if and how they do something like this in LOTRO.

As I promised in my previous post today I did capture the new set information for the Annuminas and Helegrod armour sets.  I have since updated both the spreadsheet and Google Docs version of my previous armor comparisons for those who care.  I have not updated the Minstrel sets, but I will include the light and medium Annuminas sets for that one.  Overall the sets aren’t bad but really they’re just providing another path and option for folks if they want to get the required radiance.  When Bullroarer comes back up I will post with some screen-shots of what these look like and the barter levels but essentially they look like the original versions with different color schemes.  Basically the same idea as what they did with the moors sets.

The latest installations of the Beta Journals are up with the focus on the newly updated New Player Experience. I’ve always enjoyed the intros as I thought they did a pretty good job of explaining things as well as getting you into your storyline and role.  With the tweaks in the UI we’ve heard about it probably is good to tweak the intro as well.  Plus with the influx of new folks it makes sense to not only introduce our role but bring some of the other main characters in play earlier.  Since many decide it they like the game very quickly it is important for these intros to be fun, helpful, and visually stunning so I’m perfectly fine with Turbine spending resources to update them.  You can get a good feel for some of the tweaks by looking at the new screenshots that were posted over on a Casual Stroll to Mordor.  The one with the Black Rider almost makes me want to roll a hobbit 😉

I wanted to toss a quick shout-out to the Numenorean Update which in addition to being a new blogger he’s also released his first episode of his Podcast.  You can also find the podcast on iTunes as well.  Pretty good start to the show and he also will be bringing in various lore segments which I’ll admit I can’t get enough of.