My Minstrel in Mirkwood

So as a break from my warden, I decided to get my Minstrel up to the level cap next.  It is quite a nice change of pace from the warden, although I’ve certainly realized the hard way that I am pretty darn squishy 😉  Every now and then I go a get a tad aggressive on my pulling and grab more then 3 and think I can handle it, which usually doesn’t end well.  Right now, I’m currently running a full warrior-skald build with the capstone and 2 from the Protector of Song line which seems to be working pretty well.  The ICMR buff from Battle-hymn and extended anthem duration means I can have that ICMR buff up pretty much constantly!  I don’t seem to be having many resist issues like when Moria first launched and I’m still seeing LOTS of crits.  It is quite fun to AoE 3 mobs and hit them all for over 2k 😉  which after playing a warden as much as I do, is a substantial difference.  However, when I don’t crit and a couple friends decide to join the fray – I’m praying my feign death is still up!  I’m about mid-way through Mirkwood and 62 so far, and hit Friend reputation so I can now craft those jewelry items.  I’m currently working through the lovely are of Dannenglor, which I think is probably my LEAST favorite part of Mirkwood – lots of mobs, lots of roamers, and pretty quick re-spawns make it a very unfriendly area 🙂  That and the quest drops don’t seem to be all that frequent so you’re stuck there for a while.  Not to mention the stupid elves can’t communicate with each other or realize how much crap actually is up there that they might want so I have to make at least 4 trips.

After looking at the Mirkwood crafted jewelry a bit more I’m less impressed then I initially was.  The stats are good, don’t get me wrong, but I think I’m only going to use the Sage’s Greenwood Necklace on my minstrel.  Everything else seems to be too big of a hit with not enough of an upside.

I’m also probably going to tweak my UI a bit after reading Harperelle’s post on that topic.  Mine isn’t all that organized as you’ll see from the snaps below.  Most of my oh *#@& skills are on the vertical bar near my character with the travel and seldom used ones on the left side.  The other 4 are somewhat organized, but not very well.  Luckily I can move things around pretty easily as all my healing, ballads, and war-speech skills are done via my controller, so I’ll just re-map them. 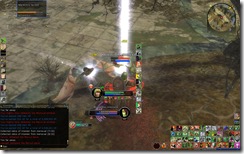 I should have another post out a bit later with some other Mirkwood and patch related items, assuming I don’t get distracted in game.

6 responses to “My Minstrel in Mirkwood”